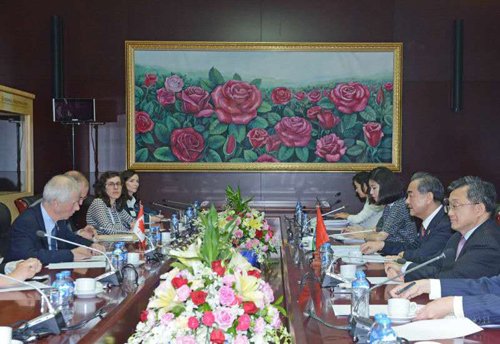 Posted by Charles Burton at 3:36 PM No comments:

I judge this will be very very badly received in Beijing and negatively impact the Prime Minister's upcoming visit to China.
Posted by Charles Burton at 8:21 AM No comments:

The Chinese government has repeatedly denied any involvement in hacking, but Mr. Su’s cyber-espionage efforts have been lauded by state-controlled media in China.
“On the secret battlefield without gunpowder, China needs special agents to gather secrets from the U.S. As for Su, be he recruited by the Chinese government or driven by economic benefits, we should give him credit for what he is doing for the country,” said a March editorial in the Global Times, a publication with significant ties to the ruling Communist Party.
The editorial was headlined: “Su Bin deserves respect whether guilty or innocent.”
Posted by Charles Burton at 6:48 AM No comments:

Canada Should Be Careful with Li Keqiang Visit in September

An editorial published in the Wall Street Journal July 5 (http://www.wsj.com/articles/the-xi-jinping-ascendancy-1467748121) is predicting the possible "removal of Premier Li Keqiang, the one Hu ally on the seven-member Politburo Standing Committee, the pinnacle of Chinese politics."  Mr. Li is scheduled to visit Canada in September.

This Li visit could therefore become a replay of the fiasco of Prime Minister Harper's going to Chongqing to "build relations" with Bo Xilai as Bo's purge was already in process.  The Canadian Prime Minister was the last foreign leader to be seen with Bo just prior to his arrest in 2012.

But a similar miscalculation on our part substituting a Premier of the State Council and more importantly a Standing Committee of the Politburo member as Mr. Li is could be a lot more damaging to Canada-China relations.

Chinese factional politics is a dangerous game.  Canada should take care not to become inadvertently drawn into it to our peril.
Posted by Charles Burton at 7:30 AM No comments: