Guess Who Was Coming to the Liberal Party Lunch? 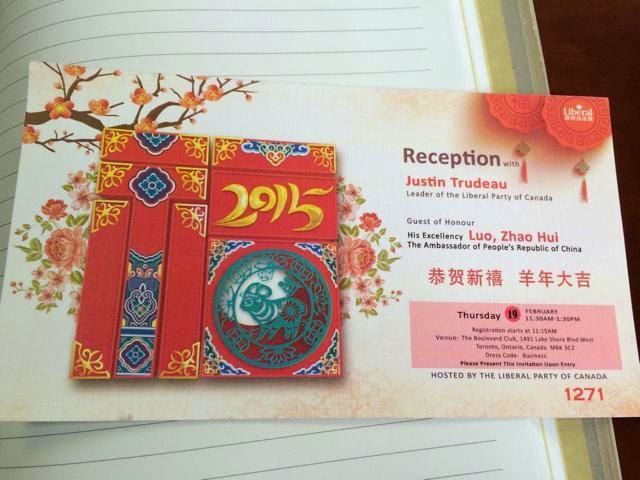 "In the end, China’s ambassador didn’t show up to the Liberal event Thursday. The Liberals say he declined to attend due to a scheduling conflict": http://globalnews.ca/news/1839981/trudeau-shouldnt-have-invited-chinese-ambassador-to-liberal-event-ndp/

Posted by Charles Burton at 7:50 PM No comments:


Interview (in Mandarin) on Garratts broadcast on Radio Canada International
Posted by Charles Burton at 12:01 PM No comments:

Q: Canadian citizens Kevin Garratt and Julia Garratt are detained in China on suspicion of stealing state secrets. What is China's comment on this?

A: Suspected of getting involved in activities that undermine China's national security, Kevin Garratt and Julia Garratt have been put under residential surveillance by the national security agency of Dandong, Liaoning Province of China starting from August 4, 2014. In alignment with relevant laws and regulations of China, the national security agency of Dandong, Liaoning Province held Kevin Garratt in criminal detention for suspected theft of and prying into state secrets and released Julia Garratt from custody on bail on February 3, 2015. Relevant authorities of China will deal with this case and ensure the rights and interests of people concerned in accordance with the law. The case is still under investigation at the moment.


My comment:
It would have been easier to have extracted the Garratts when they were still being interrogated.  Now that evidently a determination has been made to proceed against them, the "trial" will certainly be an abysmal formality.  A Chinese tribunal finding them innocent at this stage would be unprecedented.
I wish that Mr. Baird had shown more fibre in his dealings with the PRC.
I am grievously concerned about the Garratts.
Posted by Charles Burton at 1:20 PM No comments:

Now that John Baird is no longer Minister of Foreign Affairs I do hope that Canada will adopt a more aggressive approach to getting due process of law to apply to these Canadians innocently caught up in an amoral geopolitical game.
Posted by Charles Burton at 7:46 AM No comments:

My article  "Canada's China policy under the Harper government," published in the new issue of the journal Canadian Foreign Policy, is now available on-line.

I am allowed to give away 50 free links to it.

Anyone who who like one, please let me know: cb@charlesburton.org

Posted by Charles Burton at 3:33 PM No comments: