1. August 21, 2009:
While I was in China this past summer, I was invited to dinner and the dinner table the conversation turned to recent loosening of the one child policy requirements.  I had felt rather uncomfortable in Kunming seeing billboards and ads on buses place by hospitals and clinics competing for the business of abortion of "unplanned pregnancy."  Some offered "specials" of only 100 yuan for professional fees for an abortion, no appointment necessary.  That would be about $15 Canadian.  So I am happy to learn about this loosening due to the new problem of aging population in some areas such as Shanghai.

Continuing the table chat, I mentioned how many childless Canadian couples had adopted abandoned baby girls from China and what a joyous thing it was to see happy families of loving white parents and Chinese looking girls together.  I was then asked about the costs of adoption and I explained my understanding of the various not inconsiderable costs of adopting from China including the "donation" to the Chinese orphanage.  To this I was told, "you should recommend to Canadian couples that if they want to adopt they could save money by coming to my province to get them.  It would be cheaper and chances of getting a boy to adopt much better."  I asked how so?  The answer was that some out of plan babies, boys as well as girls, ended up in orphanages because their parents could not pay the fine for having an "illegal" second child (usually about a year's average salary as determined by the economic conditions locally).  So the local authorities are keen to get their share of the foreign "donation" for such babies and offer such "out of plan" infants from poorer families at a discounted rate to ensure that the babies are well away in case their grieving parents try and find them and steal them away without paying the fine.  So these are not actually orphans on offer but actually children forcibly ripped from the arms of their loving mothers.

I have no evidence that this sort of thing actually has been going on or if it is just some urban myth repeated between toasts of Chinese wine at a convivial occasion.  Nevertheless, it gives me the chills to think about it.


2. October 20, 2009:
The National Post published a from page story this morning entitled: "Canada probes claims of baby abductions" (http://www.nationalpost.com/news/story.html?id=2121328 or here) about the sort of "official baby napping" I described above.  I can imagine that this sort of publicity causes the Canadian parents of lovely girl babies adopted from China a great deal of doubt, guilt and mental anguish.  I deeply regret that.

The fact is that  parents in the People's Republic of China have to get a permit from the state to have a "legal" child.  "Out of plan" children cannot be entered into the "household registry book" (hukou bu) so they are ineligible for government subsidized education and health services.  This is certainly a major causative factor in the abandonment of baby girls to be cared for by the state (in which case they do qualify for educational and health services as orphans).  For the most part while adoption within families is surprising common in China, domestic adoption of non-relatives is not.  I only know of a very few examples of this.

There is lots of nonsense on this subject put out on the internet and in print by groups that have serious gripes against the Chinese regime.   I remember a few years ago there were claims that made quite a sensation in the Western press that Chinese orphanages all had special rooms where a portion of the infants were left to die a miserable death by starvation.  My judgement is that this is absolutely impossible and untrue.  Chinese people would never put up with anything like that whatsoever.  It was ridiculous to even imagine such a thing of a nation of people who are so soft-hearted and kind to all children whether their own or someone else's children.  Unfortunately a lot of people in the West wrongly assumed it was the fact.

Last week by coincidence I was in touch by telephone with the director of a combination orphanage and old age home in Zhejiang near Hangzhou.  This orphanage has been extensively involved in foreign adoptions.  He told me that in December construction of a new and modern facility for the orphans and indigent old people under his care would begin.  The new building is presumably at least partly funded by the donations from foreign adoptive parents.

I am absolutely confident  that the vast, vast majority of the girls adopted by Canadians from China are children whose families have had to abandon them out of concern for the future well-being of the child.  The fortunate among them become much-loved daughters of Canadian parents.  What could be better and more beautiful than that?

Posted by Charles Burton at 10:38 AM No comments:

There is an item in the press this morning quoting some remarks made by former Prime Minister Chretien in Paris today.  It sumarizes his comments as follows: "Canadian goodwill towards China began with Pierre Elliott Trudeau's recognition of Beijing, and grew to the point where he was once told by a Chinese leader that Canada was China's best friend."

I was present at a dinner in Beijing in the autumn of 1998 when the Chinese Premier Zhu Rongji abandoned his prepared remarks and said that "Canada is our best friend" (Jiananda shi women zuihaode pengyou).  Mr. Zhu was sitted at the head table between Mr. Chretien and Mr. Chretien's son-in-law, Andre Desmarais whose Power Corporation has extensive business interests in China, at the time.

Of course I am a proponent of "goodwill" in all things.  But I am of the school of thought that Canada only has interests in its international relations, "friendship" not properly entering into it.


October 21: Lorne Gunter published an opinion piece "The 'soft power' myth" in the National Post today that I agree with on this point and on others: http://www.nationalpost.com/opinion/columnists/story.html?id=47249cbb-70d3-4ad3-99f5-3ba5a2c4e9e0 or here.


Posted by Charles Burton at 4:53 PM No comments: 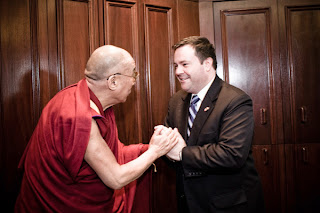 On October 4, 2009, Jason Kenney met in Montreal with His Holiness Tenzin Gyatso, the 14th Dalai Lama. The Dalai Lama is one of Canada's four living honourary citizens.
Posted by Charles Burton at 9:50 AM No comments: